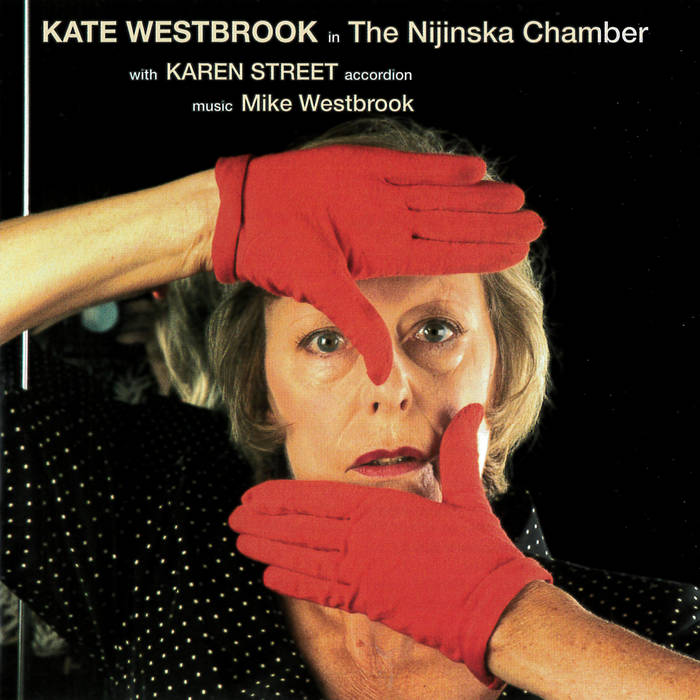 Written by Kate Westbrook with a score by Mike Westbrook, The Nijinska Chamber celebrates the life of choreographer and dancer Bronislava Nijinska.

Snatches of popular songs of the period, place Nijinska in 1950s America as she looks back on her extraordinary life. In The Nijinska Chamber she conjures up her St Petersburg childhood, the suffering of her war-torn youth, and her long working life. She re-visits her years with Diaghilev’s Ballets Russes where many of the most innovative and important artists of the 20th century forged their art,- figures such as Stravinsky, Bakst, Picasso, her brother Nijinsky. It was in Monte Carlo where she first spent time with her great love, the Russian singer Chaliapin. Now, in California, she has her books, her lemon grove, her family, her young students. She is about to go to Italy, to Venice, where she will recreate her seminal ballet Les Noces, at the Teatro Fenice, and she will take a vaporetto across the lagoon in order to stand by the grave of Diaghilev.


𝗥𝗘𝗩𝗜𝗘𝗪𝗦:
Kate is a fine writer and performer, with a brilliant approach to text.

The life of choreographer Bronislava Nijinska provides the inspiration for Kate's most recent piece, a collaboration with composer Mike Westbrook and accordionist Karen Street.

It's a moving piece, and Kate's voice has attained an intriguing balance between high drama genuine pathos and a kind of emotional equilibrium.
Penguin Guide to Jazz on CD - 9th edition
4 Star Review

Kate Westbrook’s previous recorded projects, Good-bye Peter Lorre (Femme, 1991) and Cuff Clout: A Neoteric Music Hall (Voiceprint, 2001), have both exploited one of the most distinctive and affecting voices in the music to powerfully dramatic, if basically heterogeneous effect; on this latest album (significantly labelled on its front cover ‘KW in The Nijinska Chamber’), she has created an entirely homogeneous presentation, via nineteen short songs interspersed with spoken commentary, dealing with various incidents from and matters pertaining to the life of choreographer Bronislava Nijinska. Early life in St Petersburg, first love, dance classes, the status of her celebrated brother and Diaghilev’s Ballets Russes, her 1921 escape to Vienna to join Nijinsky (by this time in an asylum), her unhappy devotion to Chaliapin, her final years in America (from where she reminisces, forming the narrative spine of the piece) are all touched on via songs of great tenderness and sensitivity, delivered from a variety of perspectives that perfectly utilise Kate Westbrook’s extraordinary vocal versatility and flair for the theatrical.

The music, written by Mike Westbrook, is appropriately striking, consistently emotional and touching without ever veering into sentimentality, and in accordionist and occasional fellow singer Karen Street (the sole accompanist throughout), the music has found a superb interpreter, the varied textures and tones of her instrument perfectly capturing the subtlest shades of emotion expressed in the songs, from the tenderness of first love to the simple enjoyment of a milk shake. Although clearly designed as a stage presentation, where its humour, pace, variety and intimacy would come into their own, The Nijinska Chamber works well as an album, and provides yet more evidence, were it needed, of Kate Westbrook’s importance as an artist, unaffectedly weaving into her music, as she so often does, elements from the visual, dramatic and performance arts in a way unique to her.
Chris Parker - The Vortex Web Site

This is one of a handful of excellent recent vocal albums that genuinely push the envelope in terms of what's possible for jazz. Jeanette Lambert and Susanne Abbuehl have done it with poetry and contemplation, while Norma Winstone takes off with carefully chosen material in a powerful big band setting. By contrast Kate and Mike Westbrook use just Karen Street's accordion and dramatic narrative.

The story of Russian prima ballerina and choreographer Nijinska is the stuff of high drama peppered with its guest appearances from Diaghilev, Stravinsky, Picasso and actor Mickey Rooney. Kate tells the story in snatches from and glimpses into a life lived boldly. The Westbrooks' efforts to establish a jazz-based musical theatre is sadly underrated here and this is a triumph. Mike's music, played with real joy by Karen Street, is beautifully expression laden and rich in sentiment. While Kate's vision of the dancer and her world succeeds in conveying the sexual, emotional and political ambiguities of the demimonde Nijinska inhabited with rare understanding and empathy. A case of artist to artist, I guess. Definitely Kate Westbrook's best work to date.
Duncan Heining - Jazzwise September 2006

Bronislava Nijinska joined Sergei Diaghilev's pioneering Ballets Russes troupe in the early years of the 20th century and later became an innovative choreographer in her own right. During her lifetime she was overshadowed by her brother Vaslav Nijinsky. British lyricist and vocalist Kate Westbrook has built a picturesque theatre piece around Nijinska's later years as she looks back over her career and life.

Mike Westbrook's music restricts itself to solo accordion, overcoming the constraint with a palette of textures and harmonies which deftly evokes a long gone post-Rite Of Spring soundworld. The range of Kate Westbrook's vocalisations encompasses intimate soliloquies and scenes on a cinematic scale, while accordionist Karen Street sustains 60 minutes of energetic invention. A unique project.
Philip Clark, The Wire 269, July 2006