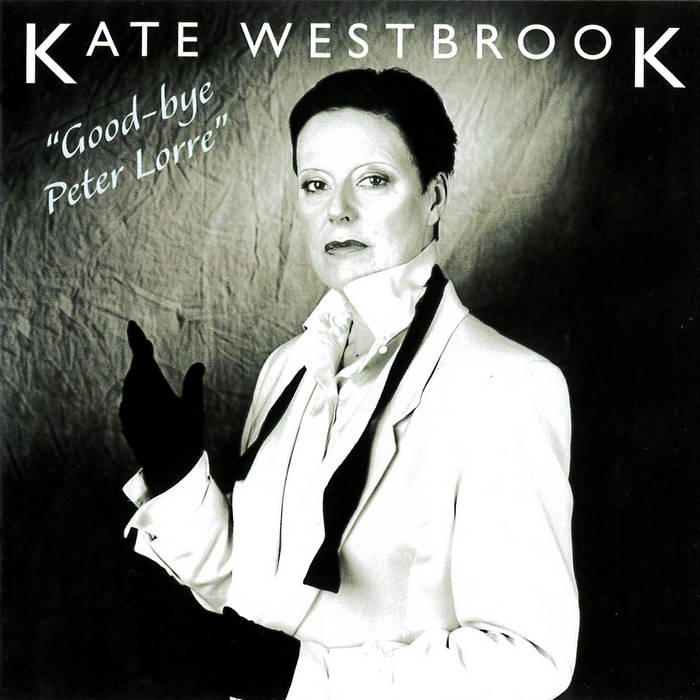 Kate Westbrook's album GOODBYE PETER LORRE has at its heart the Bertold Brecht / Hanns Eisler 'Hollywood Elegies'. Visiting Hollywood in 1941, Brecht was dismayed to find his friend Peter Lorre (once regarded in Germany as the greatest actor of his generation) corrupted by 'Tinsel Town' and lost to Art. Brecht poured his scorn and his regret into a sequence of short poems, Hollywood Elegies, brilliantly set to music by Hanns Eisler.

The artist's moral dilemma, as exemplified in the split between Brecht and Lorre, is Kate's starting point in assembling this collection of songs. She draws on popular standards, on Brecht / Weill, Cole Porter, and on original theatre songs, as she explores themes of betrayal and of 'selling out' in politics, love and art.

GOODBYE PETER LORRE, with its broad sweep of emotions, takes place within the framework of the Silver Screen. Kate, as the Chanteuse, takes us on the artist's journey, - whatever her inner conflicts and whatever is happening in the world, the Chanteuse must go on stage and face the public - 'The Show Goes On'.

Kate Westbrook is accompanied by pianists John Alley and Mike Westbrook, and joined on several tracks by the vocal group Fine Trash. The album is produced by Jon Hiseman.

GOODBYE PETER LORRE was originally released by Line Music, Hamburg, in 1991 on the Femme label. It has now Now revised and re-mastered, and issued by Voiceprint,

𝗥𝗘𝗩𝗜𝗘𝗪:
The vocal group Fine trash feature on two tracks only. Otherwise, it's an album that stands or falls by Kate's performance alone. Her style draws consciously more on the European cabaret and Broadway traditions than jazz and the material here suits her well. This is the story of Peter Lorre, one of pre-war Germany's greatest theatre actors lost to Hollywood decadence, his art destroyed by drugs and debts. The contrast with his one time friend Brecht is sustained by a fine version of 'Sailor's Tango', a magnificent 'Surabaya Johnny' and by 'Hollywood Elegies', a series of short Brecht poems set to music. As she ponders Lorre's fate, Kate meditates on the inherent conflict between art and entertainment, friendship and estrangement and on exile both external and internal. With a well-chosen programme, 'Love For Sale', 'As Time Goes By' alongside some marvellous lyrics and translations from Kate, including the marvellous 'Goodbye Peter Lorre' and 'The Show Goes On', the disc is a highly evocative and effective piece of creative work put together with painterly attention to detail.
Duncan Heining - Jazzwise