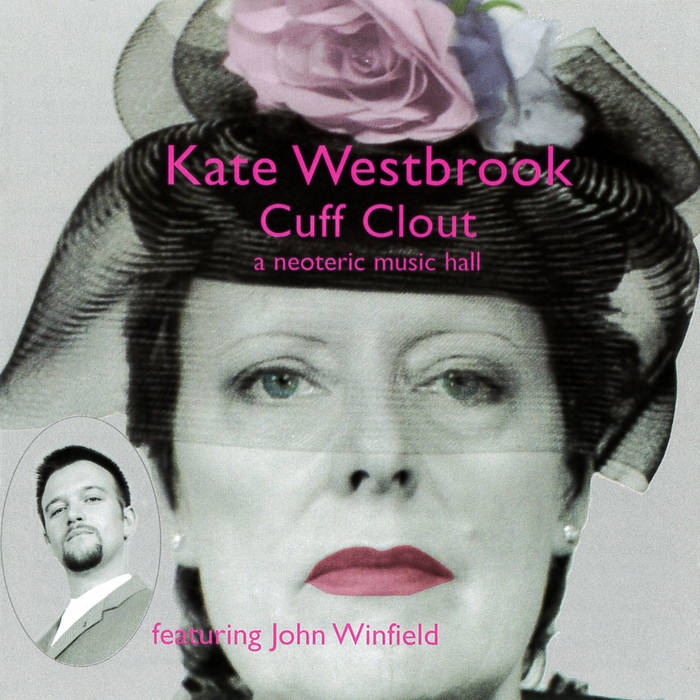 With CUFF CLOUT Kate Westbrook presents a new take on the English Music-Hall. The dominant form of popular entertainment throughout the early 20th century, Music-Hall was a loose assemblage of songs and sketches, both comic and serious, spiced with political satire and sexual innuendo.

In her neoteric Music-Hall, - "a Music-Hall for the 21st century", Kate brings together the disparate elements of traditional Music-Hall in a thoroughly contemporary context. Her lyrics embrace tragedy and comedy, and range from high art to knock-about. By inviting 8 composers from across the whole spectrum of contemporary music to set her texts, Kate has ensured a rich and surprising mix of musical genres.

Kate and her accomplice John Winfield produce an astonishing variety of vocal performances and characterisations, sometimes solo, sometimes as a double act, as they move through a sequence of dramatically varied musical settings.

Marching under the banner of 'The Skirmishers', the 20 or so performers on the album represent a cross-section of the UK's most accomplished and creative musicians, - rock, jazz, classical and pop.

Intensely moving, witty, charming and touching by turns, the album provides a perfect vehicle for the dramatic vocal skill of both Kate Westbrook and her singing partner John Winfield and shines an intriguing new light on a neglected but distinctive area of English culture.
Jazz at Ronnie Scott's, July 2004

British vocalist Kate Westbrook has a gift for music theater. Updating early 20th-century English music hall on Cuff Clout, Westbrook sets her witty and eccentric texts to bold and fascinating genre-crossing music composed by eight collaborators, including her bandleader husband Mike Westbrook and other Anglo jazz worthies Chris Biscoe, Lindsay Cooper and Barbara Thompson. Maintaining a wicked edginess in her rich, limber voice, she skewers the memory of the millionaire inventor of barbed wire on "Glidden" and plumbs a gloomy, stately mood on the striking piano-and-voice ballad "My Lazy Goodheart," where her emotional timbre suggests blood ties to Marianne Faithfull. John Winfield is one hell of a lead singer, too, playing the part of a jailbird's confederate to the hilt in "Toad's Washerwoman" and wrenching cryptic meaning out of the words to "The Riddle."

With contributions from the likes of Jenni Roditi, Mike Westbrook and Errollyn Wallen, among others, interest for the listener is guaranteed. Kate Westbrook is the contributor of the lyrics, which she has crafted with skill and performs with aplomb. The combination of her Lenya-like voice with that of John Winfield's clear jazz tenor works exceptionally well. The album has been stunningly produced and engineered."
Antonia Couling - The Singer, June / July 2005

Music originally commissioned by Kate Westbrook in 1994
with funds from the Arts Council of England.